WINDSOR — A local firm is leading an effort to convince California residents that modern technology can clean wastewater so well that the resulting water can be blended with conventional drinking water to solve current and future water crises.

Public affairs agency Data Instincts, whose previous work includes outreach on The Geysers wastewater recharge project and recycled-water programs for Santa Rosa and Windsor, is part of a team of communications firms and academics tasked with developing a realistic plan and methods for building public support for “direct potable reuse.”

That means, highly treated wastewater would be routed to drinking-water treatment plants for further processing or blended with water in distribution pipelines. Currently, tertiary-treated wastewater is allowed to be used in certain agricultural, commercial and limited residential irrigation via segregated piping, with warnings not to drink the water. An alternative is indirect potable reuse, which pumps treated wastewater into aquifers to replenish tapping from wells and take advantage of natural filtering.

What Data Instinct and the rest of the team will be battling is the “toilet to tap” epithet that came into common parlance in recent years amid legislation and project proposals in California and other drought-prone states and countries to transform wastewater into a water-saver. Yet, advances in technologies such as reverse-osmosis treatment, which uses tiny-pore membranes to screen out virtually all but water molecules, have been coming into wide approved use for dramatically reducing water used for cleaning winery, brewery and other industrial equipment by recycling process wastewater in the facility.

“It’s cleaner than what most of us currently drink,” said Mark Millan, principal of Data Instincts, about the resulting quality of water after such treatment.

The potential to recoup more than one-third of the 4 million acre-feet of highly treated wastewater that annually is flushed into California waterways by 2020 and up to two-thirds of current discharges by 2030 is behind direct potable reuse efforts in Sacramento under the Arnold Schwarzenegger and current Jerry Brown administrations.

Gov. Jerry Brown in October signed Senate Bill 322, which extends deadlines from the previous SB 918 law, to expand California’s drinking-water resources by 2017. With the governor’s emergency drought declaration on Jan. 17, the drive toward water-reuse standards has been accelerating.

Though expensive, reverse-osmosis treatment could cost less per acre-foot of water than desalination of ocean water, he noted. The firm is working with a dozen recycled-water and desalination projects in several states, including direct potable reuse pilot projects in Santa Clara Valley, Orange County and San Diego. Such projects are building on reuse projects in Australia, which has been reeling after a dry decade.

Backed by a $560,000 grant from the Virginia-based WaterReuse Research Foundation (watereuse.org), Data Instincts and Katz & Associates in Southern California are working in parallel with SB 918/322 implementation to give policy-makers outreach tools. The foundation has raised about $6 million from water districts and other sources since launching the Direct Water Reuse Initiative in mid-2012.

Under SB 918 and 322, the Department of Public Health and State Water Resources Control Board are working on standards for direct and indirect water reuse. Draft regulations were released in June and set for consideration this year. An advisory board is set to have its first meeting in February.

By August, the communication plan is expected to be ready. The second phase would be to develop graphics and messaging to communicate with the public. The third phase would involve a plan for public agencies to use in talking to neighbors. 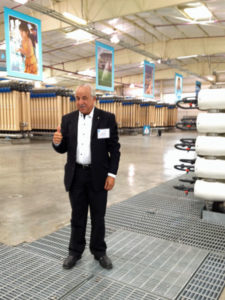